Photographer Samuel Hicks grew up in London, and his new mini-series ‘Towers’, celebrates some of the city’s Modernist social housing developments in South and East London. Looking for an easily accessible subject to get out and photograph after the 2nd Coronavirus lockdown was lifted in November, Samuel returned to a subject that he had documented as some of his first work as a professional photographer.

Featured in this series are the St. Mary’s Estate in Hackney, Falstaff House in Hoxton and the Dorset Estate in Bethnal Green designed by influential modernist architects Skinner, Bailey and Lubetkin. Built between the 1950s and 1970s, and loved and loathed in equal measure, these estates once covered large parts of South and East London, but many are now being knocked down and replaced. Photographed at dusk, the architecture, and in particular, the lighting of these buildings takes on a new aesthetic and becomes highly cinematic.

Samuel Hicks has forged a successful career in commercial and editorial photography, travelling the world working for clients such as Nike, Land Rover and Coca Cola. His personal work has taken him on location to Sweden, Norway, the US and Ireland where he shot the New York State Circus with projects published in The Independent, Wallpaper and Huck Magazine. In the last few years, his personal projects have included a series of short films on youth culture. 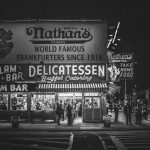