All the images from Between The Trees are photographed in Ellie’s native New Forest – a place that had a very strong influence on her growing up – and the place she has now been drawn back to produce her work. In Ellie’s images, the forest represents the confluence of nature, culture, and human activity. Forests are potent symbols in folklore, fairy tale and myth, places of enchantment and magic as well as of danger and mystery. Ellie’s work explores the ways in which identity is formed by the landscapes we live and grow up in. By making a variety of temporary and non-invasive interventions in the forest, the work places the viewer in the gap between reality and fantasy, creating spaces which encourage the viewer to re-evaluate the way in which their own relationship with the landscape is formed. Ellie was awarded First Place in the 2014 Kontinent Awards in the Fine Art Projects Category. She received an Honourable Mention from the jurors of Inside Out 2014 at PH21 Gallery in Budapest, and was selected as a finalist in the 2013 London International Creative Competition. She was awarded an Honourable Mention in the Professional Women Photographers International Juried Exhibition 2012. She was also selected for the Lens Culture International Exposure Awards 2010, and received 1st Place in the Fine Art Landscape category of the 2010 PX3 Paris Photo Prize, The Exeter Phoenix 2010 Audience Choice Award, ArtSlant Showcase Juried Winner in 2010 and 2011, and Commended in the LPA Landscape Awards 2010. To see more of Ellie’s work, and for sizes and prices, go to the Photographers section. 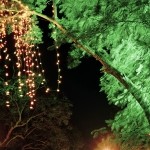